News / 12 Feb 2019 / Institute.ro
1/3
ADC Night 2019 presents on 13th of February the third edition of the annual Top 3 ADC*RO awards. We’ll celebrate with every agency and campaign present in Top 3 ADC 2018 and with the agencies which in 2018 represented Romania at ADCE Awards. ADC Night will take place at Institute The Café, starting 8 PM.

The members of ADC*RO voted for Idea of the Year// Client of the Year // Art Director of the Year // Copywriter of the Year. ADC Night 2019 will present an overview of 2018: what remarkable campaigns will be awarded and what creatives had the best ideas. 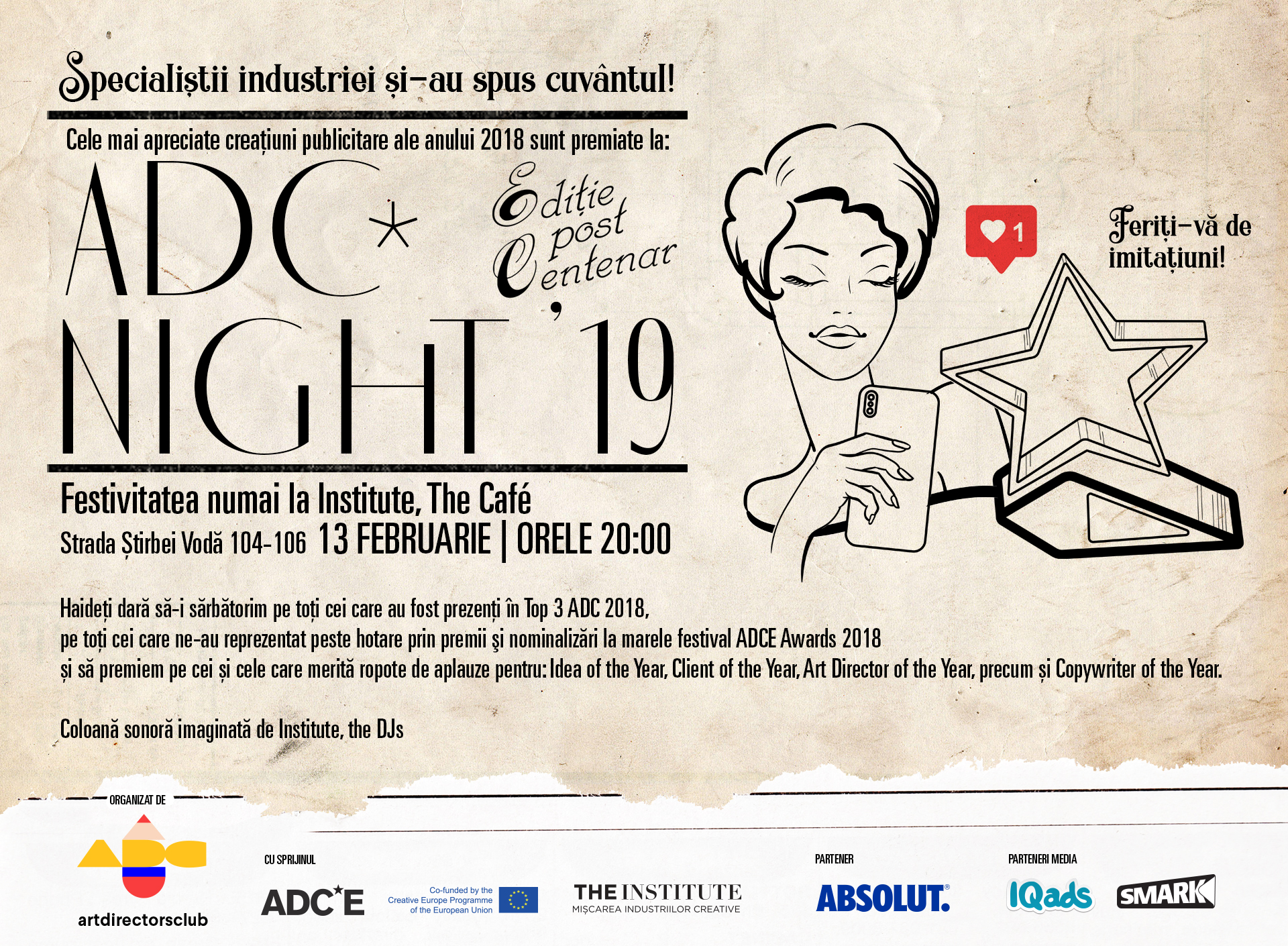 ADC Romania launches every month a public call for agencies, freelancers and advertising enthusiasts to send ideas, projects and creative initiatives of their own or seen in the industry. The members of ADC*RO will grade these ideas.
The project started in 2016 and since April 2018 the awards followed six directions: TV, Outdoor, Radio, Print, Digital şi Experiential / BTL. At the end of each month these six categories get their own hierarchy (1st place, 2nd place, 3rd place and mentions). The project with the highest grade is the Campaign of the Month.

Fighting over the Idea of the Year title: January: BRD - Heroes and unknown // February: Coca-Cola SEEN // March: Beau Monde - Bihor Couture // April: Burger King - Whopper No-Show // May: Vodafone istori@ // June: Transavia - If more had done things the right way // July: KFC - Social Me // August: Centrul Ceh - Some "visited" us in 1968 // September: ING - Save your time! // October: Coca-Cola -#samefeeling // November: PressOne - #TraiascaCapraVecinului // December: PressOne - #TraiascaCapraVecinului with brands. Client of the Year, Art Director & Copywriter of the Year titles will be given based on a system – calculating the presences in Top 3 ADC*RO 2018 & the awards received.

The participation is free.

Art Directors Club România (ADC*RO) founded in 2008 is a nonprofit association whose objectiv is to promote and recognize excellence in creativity. The organization's mission is to connect and bring together the strongest creative talents and provide them with tools for solidarity, generosity and professional excellence. Some of the most important projects of ADC Romania are: ADC*RO School, Top 3 ADC and ADC Focus.