Articol / 10 Mai 2016 / RDW team
1/5
During Romanian Design Week 2016, The Ark will host an exhibition of 35 paintings of architectural landmarks of Bucharest, made by Laurențiu Dimișcă and 5 young debuting artists selected through a competition. This event is co-organized by Rhabillage with Fundatia Outsider Art and supported by AFCN.
The project promotes cultural heritage tourism in Bucharest, highlighting the city's architectural and historical identity through representation techniques of contemporary arts, testing ways of interdisciplinary cultural interaction, offering a joint analysis of urban architectural heritage, fine mapping techniques and social dialogue between generations. The Ark is one of the 35 monument buildings represented in the exhibition. 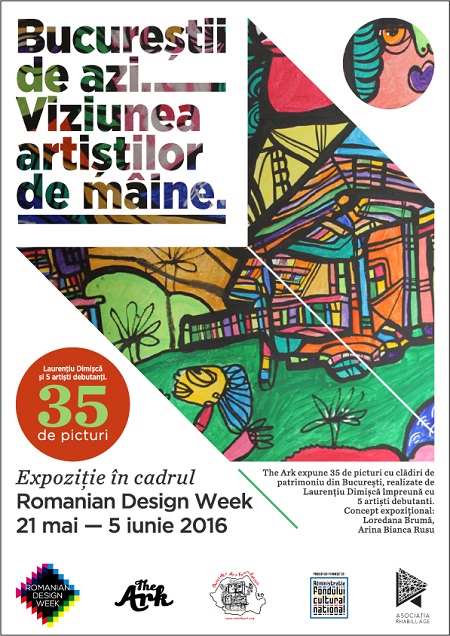 The Ark was erected in 1898 as main building of the Commodities Trade ensemble. Used as the Customs’ Postal Office after 1945, it survived the massive demolitions of the 1980s that erased the Uranus neighbourhood of the city’s map. After a fire in 1990, it stayed in ruins over the next 16 years; 7 meter tall trees grew through the derelict floors. Ranked a historical monument, marked with "danger of collapse", this 19th century industrial architecture treasure was bought and renovated by private investors in 2006. Since then it’s called 'The Ark'.  Its ground floor, with access to the terrace, hosts business & cultural events; the lower floor is used for exhibitions, conferences and different courses, from ballet to sailing and from cross fit to sewing. The top floors were transformed into office spaces and accommodate different companies involved in advertising and consulting.
Uranus Street, no. 150﻿
More about The Ark
Cuvinte cheie:   Today's Bucharest seen by tomorrow's artists / visual arts

The theme for Romanian Design Week 2020 is CHANGE

The CHANGE exhibition, part of Romanian Design Week 2020, will take place at the National Museum of Arts of Romania